"Pamukkale - that is it?" - ask himself a lot of visitors on holiday in Turkey. Local residents gave the name of Pamukkale (Pamukkale - Cotton Castle) for small plateau located in the center of the country, because of the striking similarity to cotton fields, cultivated in the vast expanses of Turkey. 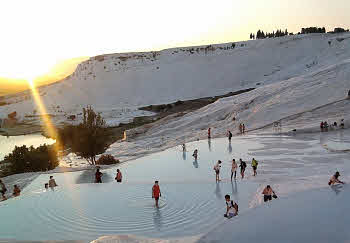 Hundreds of thousands of years ago the devastating earthquake raged in the territory occupied by the modern Asia Minor. The rocks that form the modern Pamukkale undergone shifts and breaks that gave way to the earth's surface a variety of sources of groundwater. For thousands of years water supersaturated mineral calcium is poured on the ground and evaporates in the hot sunlight, slowly precipitates on low mountain slope. So slowly emerged Pamukkale travertine - a snow-white brittle rocks formed intricate terraces and pools, clear water saturated aquamarine. So, what is the Pamukkale in Turkey? Without a doubt, this is an amazing phenomenon created by nature itself. Today the thermal springs - the invisible natural sculptor who tirelessly continuing formation dazzling white profile of a small mountain. Sightseeing tour in the Turkish town of Pamukkale usually leads tourists inexplicable delight. 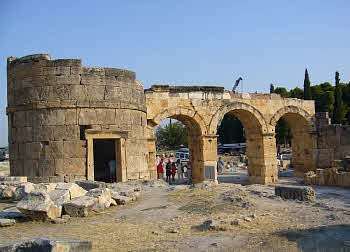 Pamukkale is still unrecognized miracle of nature, which is carefully protected not only by the government of the country. Recognizing the value of Pamukkale in Turkey on a global scale began after the entry in the book of the World Heritage by UNESCO, which took place in the late 20th century. This place is mentioned in the holy scriptures, ancient chronicles historians and Geographers. Ancient Hierapolis, a city built of travertine around the 2nd century BC, became a Roman spa and quickly developed. Mineral thermal water is widely used for the treatment of various diseases. At the period of greatest prosperity, Hierapolis received the status of the fashionable spa resort of ancient times. Nowadays Pamukkale is a recognized resort where living in an upscale hotel combined with multiple proven methods of treatment - such as mud wraps and baths, water intake inside sources, a variety of therapeutic massage program, as well as swimming in the warm waters of the thermal springs. The number of tours in Pamukkale in Turkey hits record. Today, Pamukkale - the third most popular museum in Turkey! Fees from the sale of tickets to the territory Pamukkale was about 16 million. TL. A number of visitors to the natural monument has exceeded 2.5 million peoples. This is the reason for which the tourist buses make daily hours of tedious path from luxury resorts in the Mediterranean towards the small provincial town of Denizli. What so attracts tourists in Pamukkale in Turkey, this long tour, however, has become a super popular in Travel Agents program?

Most tourists want to see with their own eyes the incredible fantastic snow, when the hot season mountainside snow-white blanket covers the travertine. Go through this gentle slope, I feel the coolness of the mineral water that fills the turquoise swimming pools, make beautiful photo on memory - this is the limit of the dreams of many compatriots. On the other hand, a fair number of tourists tends to Pamukkale in Turkey only for the fact that to get to become a world-famous Cleopatra's pool. Bathing in its mineral waters really rejuvenates the body, gives you a true relaxation and indescribable long relax. It seems incredible, but the tourists are taking a bath in the pool of Cleopatra, the bottom of which randomly scattered columns of the portico, once adorned its structure. Finally, many lovers of archeology tend to visit the ruins of Hierapolis - Once one of the very concise and at the same time grandiose cities of ancient civilization.